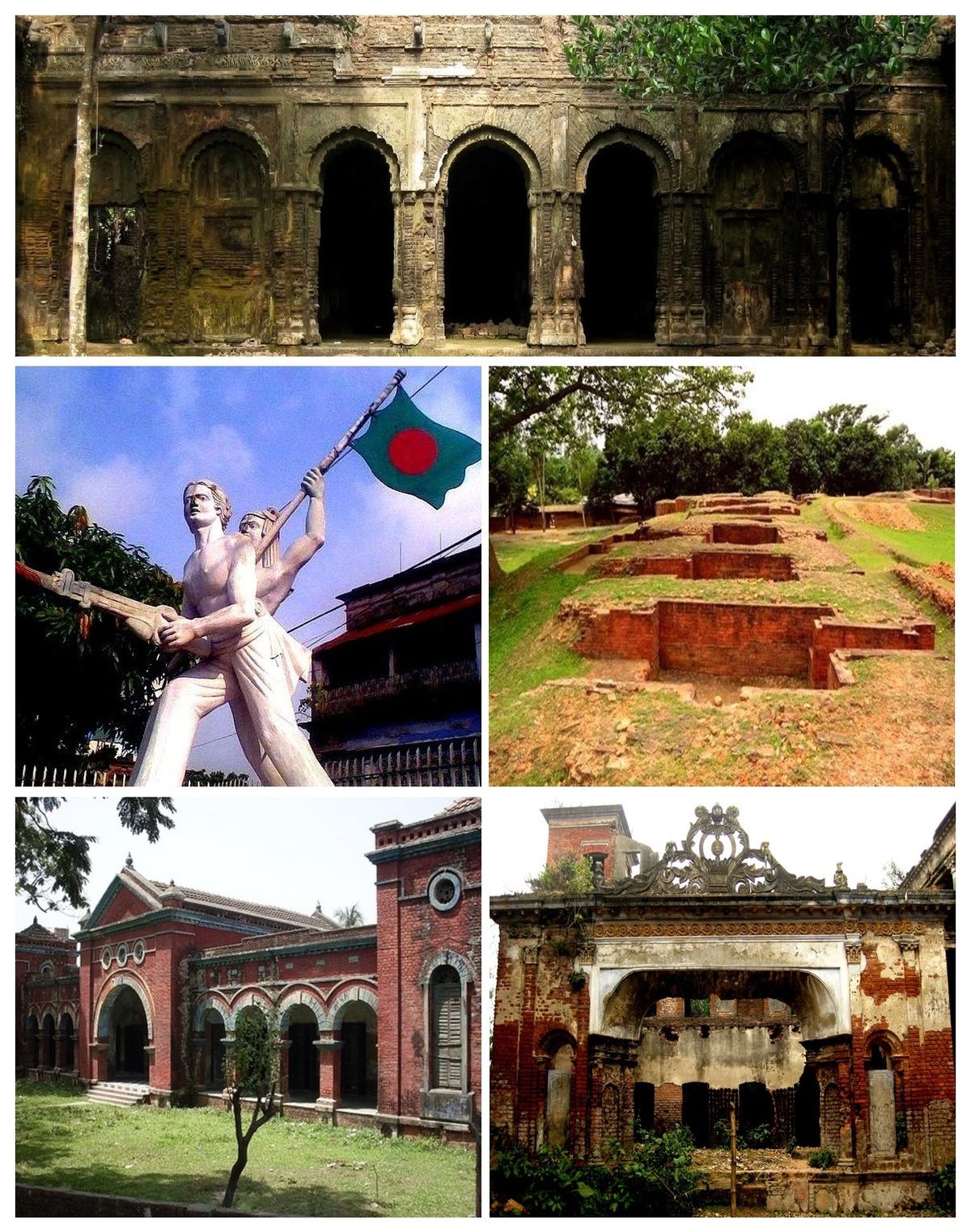 The earliest empire of Indian Buddhist rule in Bengal ( which included present - day Bangladesh ) was the Pala Empire, which ruled from the eighth to the twelfth centuries. Pala created a new genre of mass architecture which was known as Pala Sculpture School . The vast Vikramshila Vihara, Odantapuru Vihara and Jagaddal Vihara were some of the notable achievements of the Palas. Somapura Mahavihara, established by Dharmapala at Paharpur , is the largest Buddhist monastery in the subcontinent and has been described as a beauty in the eyes of the world . UNESCO declared it a World Heritage Site in 1985 Recognizes as. Pala architecture was followed throughout Southeast Asia, China, Japan, and Tibet . Bengali rightly earned the title of "former mistress". Dr. "The architecture of Bihar and Bengal has had a lasting impact on Nepal , Burma, Sri Lanka and Java , " said Stella Kramrisk . Dhiman and Vittpal were two famous Pala sculptors. Mr. J.C. about Somapura Mahavihara. " We spend millions of dollars every year researching the pyramids in Egypt . But if we had spent only a fraction of that money on excavating the Somapura monastery, who knows what an amazing discovery would have been," French said sadly .

Around 156, the Mughal Empire spread to most parts of Bengal. Dhaka emerged as a military base for the Mughals. In 1608 subahdar first-Islam Khan, the city Bengali Subah capital as a result of the development of urbanization and population growth in a wide range of accommodation, and this is the construction of numerous mosques and forts. Bara Katra was built between 1644 and 1848, as the official residence of Shah Sujar , the second son of Emperor Shah Jahan .

Today reached the final stage of the Indian Mughal Subedar of Shaista Khan's regime, civil architecture in the modern urbanization and large-scale urbanization and economic expansion encouraged to make an She also was a patron of art and the architecture of the province, such as mosques , tombs and encouraged the construction of the palace, Which represented some of the best Mughal architectural monuments. Khan expanded Lalbagh Fort (also known as Aurangabad Fort), Chawk Bazar Mosque , Saat Mosque and Chhota Katra . He supervised the construction of the mausoleum of his daughter Paribibi.

Most of the terracotta temples in Bangladesh were built at the end of Muslim rule and at the beginning of British rule by wealthy Hindu zamindars.

The historical land of the beginning of bungalow architecture is the province of Bengal . "Bungalow" actually means " Bengali " and in a distorted sense means "Bengali type house".  The houses were traditionally small, with only one storey, secluded, spacious courtyard , used by the British, on their way back from the Himalayas in the summer, and outside the Indian city as the home of the provincial administrator. Bungalow type houses are still famous in rural Bengal. In modern times, grooved steel sheets are used as the main architectural material. Earlier wood, bamboo and straw were used. Straw was used to keep the houses cool even in summer. The bungalows used red bricks as roof coverings.

The Indo-European type, which was prevalent in the past during the British colonial era, began to improve, which is a mixture of Indian, European and Central Asian (Islamic) elements. The architecture of the city Ahsan Manzil and Dhaka city located Tajhat Royal Palace .

Fazlur Rahman Khan was an infrastructure engineer and architect who introduced the basic methods of building high-rise buildings in today's era. Known as the "Einstein of infrastructure engineering",   Khan's "cylindrical design" revolutionized the design of multi-storey buildings.   Since the 1970s, most of the 40-storey buildings have been built on a cylindrical design derived from Khan's engineering principles. The Willis Tower, America's second tallest building (once the tallest not only in the United States but worldwide and for many years), John Hancock Center , Hodge TerminalHe is the architect of etc. His design not only gave the buildings a stronger and more efficient look, but also reduced the use of materials (cost-effective) in the construction of the buildings and made it possible to gradually increase the height of the buildings. The cylindrical design, enhancing the interior space, gives architects unimaginable freedom by helping the building take on any shape.   He invented the sky lobby for easy access to multi-storey buildings and introduced the widespread use of computers in infrastructure design. Fazlur Rahman is a leading infrastructure engineer of the 20th century who has left an unimaginable and lasting legacy in this profession at the national and international level.  Fazlur Rahman contributed more than any other man to the procession to build skyscrapers in the last half of the 20th century .And this has made it possible for people to live and work in the "city of the heavens."  Khan introduced a style that is unparalleled and exemplary in architectural and infrastructural engineering.

Email ThisBlogThis!Share to TwitterShare to FacebookShare to Pinterest
Labels: Architecture of Bangladesh