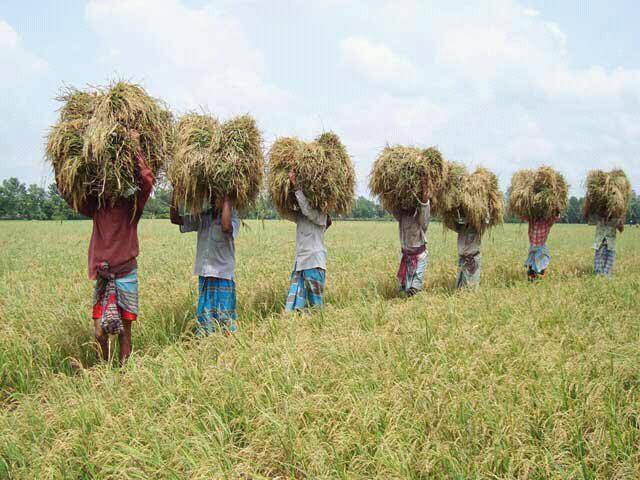 Agriculture is the largest source of employment in Bangladesh. According to the 2016 Economic Survey of Bangladesh, it supplies 40.6 percent of the total labor force and contributes 14.10 percent to the country's GDP.  The role of this sector in the macro-economy of the country such as job creation, poverty alleviation, human resource development and food security is undeniable.

A large part of the people of Bangladesh depend on agriculture for their livelihood. Although paddy and jute are the main crops here, wheat is of greater importance. Tea is cultivated in the north-eastern region. Due to the abundance of fertile land and water, paddy is produced and cultivated three times a year in many parts of Bangladesh. Despite the unfavorable weather, Bangladesh's labor-intensive agriculture has achieved a level of improvement in food production for a number of reasons. The reasons include flood control and irrigation, optimal use and supply of fertilizers and bringing rural people under debt. In 2000, the production of rice was 35.7 million metric tons, which is the main crop of Bangladesh. In 2003, domestic use of various pesticides used in rice such as granular carbofuran, synthetic pyrethroids and malathion exceeded 13,000 tons. Pesticides not only pose a threat to the environment but also pose an additional cost burden for poor farmers. Bangladesh Rice Research Institute is working with various NGOs and international organizations to reduce the use of pesticides in paddy .

Compared to paddy, wheat production in 1999 was 19 million metric tons. The pressure of the growing population is constantly hampering the flow of production which is responsible for creating food shortages, of which wheat is one. Foreign aid and trade imports are filling this gap.  Unemployment is a major problem and one of the main concerns in the agricultural sector in Bangladesh. Finding alternative sources of employment will be a complex issue for future governments, especially with landless farmers who provide half of rural labor.

Bangladesh is the fourth largest rice producer in the world. Wheat is not a perennial crop of Bangladesh and its production started in small scale in rural areas from late 1980s.  Demand for this specialty continued to grow in the 1960s and 1970s, when wheat was one of the mainstays of foreign aid. In the first half of the eighties, the annual production of domestic wheat exceeded 1 million tons, but it was only 8 to 9 percent of the total food production. A record 1.5 million metric tons of wheat production target was achieved in FY 1985. About half a percent of wheat production was on irrigated land. The amount of land under wheat cultivation remained unchanged from 1980 to 1986, which is less than 7% of the total cultivable land.

Email ThisBlogThis!Share to TwitterShare to FacebookShare to Pinterest
Labels: Agriculture in Bangladesh