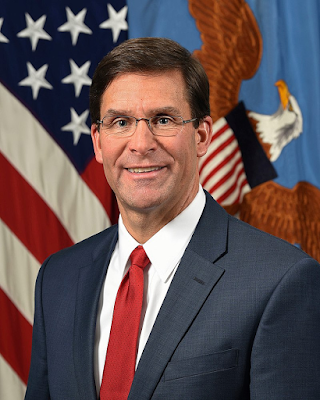 Defense Minister Asper spoke to the Prime Minister about the existing defense cooperation between Bangladesh and the United States. Prime Minister Sheikh Hasina and US Secretary of Defense Asper agreed to continue high-level dialogue and discussions on expanding cooperation in the defense sector.

Ihsanul Karim said the Prime Minister and the US Secretary of Defense hoped that the two countries would continue to work closely to deal with the emergency situation caused by the Kovid-19 outbreak.

US Secretary of Defense Asper praised Bangladesh's role in UN peacekeeping missions. He also lamented the loss of a Bangladesh Navy ship in an explosion at the port of Beirut last month.

Prime Minister Sheikh Hasina spoke about the upcoming US elections and hoped that the elections would be held properly.

Defense Minister Asper said his government is ready to help Bangladesh deal with the current flood situation or any natural disaster in the future.

Prime Minister Sheikh Hasina sought the cooperation of the US Secretary of Defense in extraditing Rashed Chowdhury, the assassin of Bangabandhu, who is staying in the United States.

Press Secretary Ihsanul Karim said Secretary of Defense Espar assured the Prime Minister of his cooperation in the matter.

3 Sentenced to Death for Rape in Bangladesh

In a landmark verdict, a Bangladeshi court has sentenced three young men to death for raping a young doctor in Rajbari 2018. Rana Mollah (26), Mamun Mollah (22), and Hasan Sardar (28) were sentenced to death.

According to court documents and case statements, the girl left Dhaka for Gopalganj on February 23, 2018, to go home. He was waiting for the bus when he reached the Goalanda corner of Rajbari.

The driver Rana Mollah took the girl in an autorickshaw saying that he would catch the bus around 7 pm. There were two more young people in that autorickshaw. Later, the girl was taken down in a secluded place and raped by three persons including the driver. They even called four more people on their cell phones. They also raped the girl. The next morning, the young woman informed the Faridpur RAB camp. On the same day, RAB arrested three accused youths. Later they were handed over to Rajbari Sadar Police Station